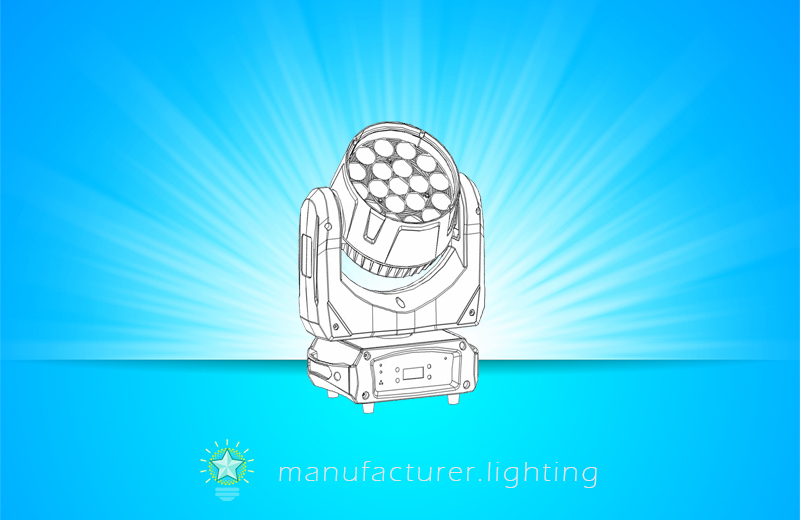 Stage lighting is designed to assist the live performance for both the performers and the audience. Lighting is used to help manipulate visibility, contribute to scene composition, accentuate movement of the performance action, and specify a mood (atmosphere) for the presentation, regardless of what the theatre type or production values. Stage lights are commonly used in television studios, theaters, opera houses, auditoriums, runways, stages, clubs, DJ shows, home parties, ballrooms, bands, concerts, etc. The ellipsoidal reflector lighting instrument, or pattern instrument, is made up of a lamp and ellipsoidal reflector mounted in a fixed relationship. The light is focused through the optical gate of the instrument in which the beam can be shaped with shutters, a gobo (a pattern template), and/or an iris. The shaped beam is then concentrated by a lens system. The output of the ellipsoidal stage lighting instrument is light having a very hard edge with precise beam controI. The Fresnel spotlight is a lighting instrument that consists of a lamp, a Fresnel lens, and (generally) a spherical reflector behind the lamp. The field and beam angles can be changed by modifying the distance between the lamp and the lens (this action is called focusing). The scoop floodlight is comprised of lamp holder, lamp, and a reflector with a matte or brushed finish. The scoop creates illumination having field angles from 90 degrees to less than 180 degrees. A PAR head instrument includes a parabolic aluminized reflector (PAR) lamp, lamp holder, socket, cord, and housing. Instrument performance varies according to the type of PAR lamp selected. The instrument is designed in order that the lamp may be rotated to cover the specified area. The PAR lamp beam can be shaped and glare-controlled with barn doors and the intensity amplified by an intensifier skirt - an exterior reflector that proceeds the parabolic contour of the internal lamp reflector. A striplight is a compartmentalized multi-lamp stage lighting instrument. When used over the stage they may be referred to as "borderlights" or "x-rays," when located at the front of a stage to supply a low level of illumination directed upward, they are known as "footlights." Cyclorama or cyc lights deliver a wash of illumination over the cyclorama curtain for background illumination. A spot luminaire projects an image of the brightly-illuminated gate aperture, including whatever light-shaping, pattern-generating, or image-forming devices could be placed there. Wash luminaires are similar to the "Fresnel Spot" luminaire, which presents a soft-edged, ill-defined beam that can be varied in proportions by moving the lamp and reflector towards or away from the lens. A followspot is a special type of stand-mounted spotlight with a shutter, iris, and color changer for color media. Spot luminaries, for example stage lighting instruments, nightclub lighting instruments and the like having motorized subsystems run by remote-control means are commonly called "moving lights" or "automated luminaires." Multiparameter lighting fixtures are lighting fixtures, which illustratively have a couple of independently remotely adjustable parameters such as focus, color, image, position, or other light characteristics. Multiparameter lighting fixtures are commonly used in the lighting industry since they facilitate significant reductions in overall lighting system size and allow dynamic changes to the final lighting effect. Stage lighting instruments located in the auditorium ceiling are often used to light downstage and approaching areas. They are occasionally employed to illuminate the proscenium curtains when the throw angles allow for a reasonable coverage. Stage lighting equipment located on the sidewalls is primarily designed to supplement the ceiling mounted instruments. Sidewall lights can deliver lower angles of light and offer a great opportunity for a side and top lighting combination to reach the stage apron (or forestage) from a wide selection of different throw angles. Angled lighting from stage lighting instruments in the auditorium sidewalls and/or ceiling position will delivereffective front lighting for many purposes, but sometimes when low angle throw light or a soft wash of directional front lighting may be desirable. Optical systems for theatrical and stage lighting fixtures are generally developed to capture light from a light source that emits light over a wide angle and generate a narrower beam of focused or unfocused light. Conventional power stage lights use gas-discharge or incandescent lamps as the light sources which  have drawbacks such as lower luminous efficacy, shorter operating lifetime, and less robust package. LED light sources are becoming extensively adopted as stage illumination devices. LEDs can emit monochromatic lights of various colors, using LED (light emitting diodes) light sources for stage lighting  can obtain color lights without resorting to filters. The relatively high saturation of monochromatic LED light sources provides more freedom in creating desired color lights for stage lighting systems. Most modern stages have a lighting console which controls the different light level settings and enables them to be recorded in the proper sequence. DMX512 signal control allows a myriad display of programmable and controllable special effects.