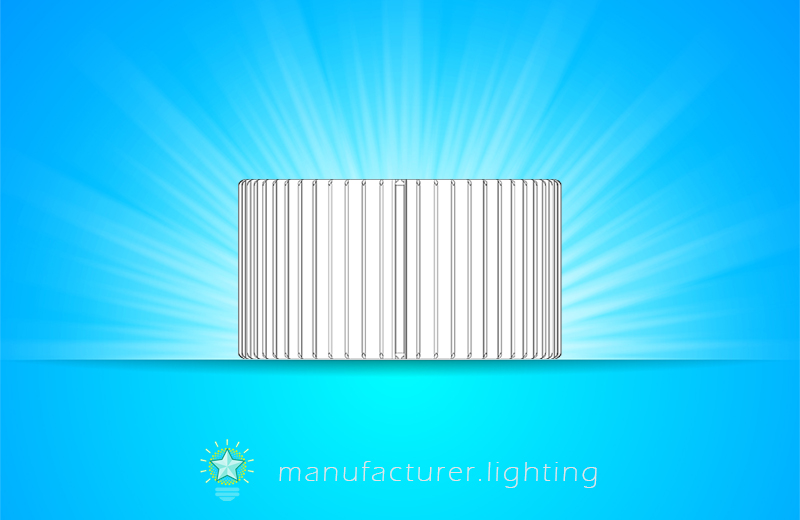 Heat sinks are being used with LEDs and provide a pathway for routing the heat generated from the LEDs and for dispersing or spreading the heat directly or radiantly to the surrounding environment. Light emitting diode (LED) is a semiconductor device which converts electrical energy into light energy. One of the key benefits of LED-based lighting is that it exhibits a significantly greater efficiency with respect to light output per unit power input when compared with traditional incandescent lighting. Nonetheless, temperature affects the lifespan and stability of commercial LEDs. As a byproduct of converting electricity into light, LEDs generate heat and increase the operating temperature, ultimately causing efficiency degradation and premature failure. For instance, when a high-power Ga N type LED is energized, only 20~30% of the electric energy is converted into light energy for lighting, and the rest 70%~80% of the electric energy is converted into thermal energy that is not useful and should be expelled to the surrounding environment. Performance of LEDs is temperature dependent, and LED light output in fact improves at cold temperatures. Over-heating of the LED is a major factor in device failure. Typically, a heat management system, say for example a heat sink, is used together with the LEDs to assist in maintenance of proper LED operating temperatures. Heat sinks are an essential component to maintain long life of the LED luminaire. This is particularly important to have a low failure rate when LEDs are employed in applications where the device must work over a large range of temperatures, and failure could cause serious problems. A heat sink is a component providing a large surface for dissipating and convecting heat away from the LED lights. In a typical design, the heat sink is a somewhat massive metal component which has a large engineered surface area, for instance by having fins or other heat dissipating structures on its outer surface. The large mass of the heat sink efficiently conduct heat from the LED devices to the heat fins, and the large area of the heat fins allows for efficient heat egress by radiation and convection. A typical heat sink is characterized by a heat transfer base panel and a plurality of radiation fins arranged on the top side of the heat transfer base panel. The heat transfer base panel and the radiation fins are manufactured from aluminum or copper. LED luminaire heat sinks are generally manufactured with the casting process or the extrusion process. The casting process involves a series of steps which includes developing a mold with specific dimensions and allowances, melting a base metal and incorporating a degasser component, machining the heat sink to get the required dimensions, and polishing to provide a finish to the surface. The extrusion process entails pushing or drawing a material through a die of the desired cross-section. Exemplary materials which can be extruded include, but are not limited to, metals, such as aluminum, copper, lead, tin, magnesium, zinc, steel, and titanium, polymers, and ceramics. In comparison with casting process, the extrusion process provides several advantages over other manufacturing processes. The extrusion process is capable of forming very complex cross-sections. The extruded heat sink also is able to work on materials that are brittle since the material only encounters compressive and shear stresses. The process further forms finished parts which have an excellent surface finish. The extrusion process also is more economical than other manufacturing processes. In addition to heat sinks, high power LED lamps such as LED high bays, LED floodlights employ active cooling using fans or synthetic jets or heat pipes or thermo-electric coolers or pumped coolant fluid to enhance the heat removal.