How Does an Edge-lit LED Panel Light Work

Abstract: LED panel lights are designed to fit directly into existing standard suspended ceilings and recesses, or can be surface mounted to ceilings or walls.
Lighting fixtures in the 2×2 foot and 2×4 foot sizes have for quite a while been illuminated using linear fluorescent lamps. These fixtures are often known as fluorescent troffers. The troffers are wired to the AC bus lines above the suspended ceiling. A fluorescent troffer can incorporate components such as a sheet metal enclosure, a fluorescent ballast, fluorescent lamps and optics to shape the light produced through the lamps into something visually comfortable for the environment where it will be used. Troffer-style fixtures are prevalent in commercial buildings and industrial spaces throughout the world. Nevertheless, the conventional fluorescent tubes have life cycles significantly short and somewhere around lasting from 3,000 hours to 4,000 hours, and have comparatively low power factors, leading to the issue of relatively high power consumption. Aside from that, the removed lighting fixtures or components pull in a waste stream for disposal or recycling. Disposal poses serious environmental concerns from hazardous or toxins in the removed components, which include mercury in the fluorescent lamps and chemicals such as polychlorinated biphenyls (commonly called PCB's) in the ballasts. Consequently, lighting industry and academia invest their time and effort to expand lighting applications with LED due to the advantages of LED in high efficiency, low power consumption, high reliability, swift response time and low failure rate. 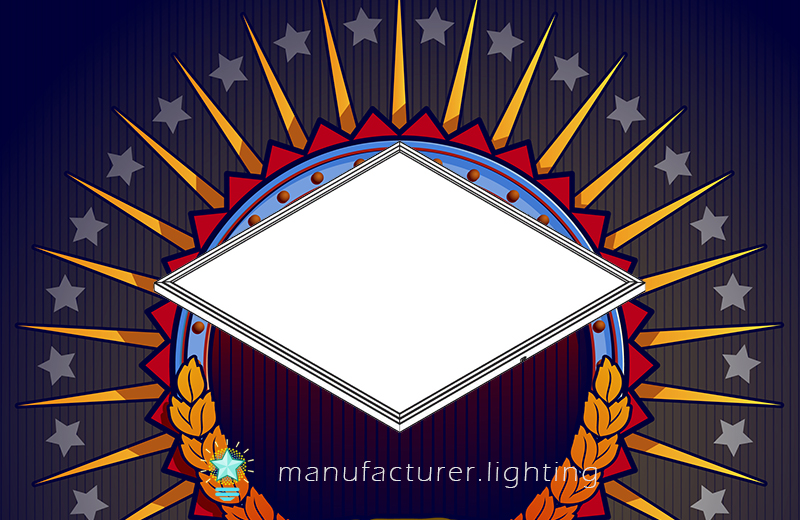 Light emitting diodes (LEDs) are getting more commonplace in general illumination applications, such as office spaces and conference rooms. LED flat panel light is an innovative lighting product in recent years. Suspended ceiling represent a large proportion of the commercial, office and retail space. An LED panel light is designed to provide sufficient lighting to replace the current fluorescent fixtures of varied light intensity, or lux level. Two of the primary lighting panel structures are direct-lit backlight modules and edge-lit modules. A direct-lit LED panel comprises a plurality of LED light sources which are directly disposed under a panel. But bear in mind, LED is a form of directional light source of which light output intensity of the Lambertian lights is strongest at 90 degrees. LEDs are oriented directly toward light diffusing layer, inducing the light emitted from LEDs to shine directly onto light diffusing layer. As a result it creates a point source of light which can be uncomfortable or harmful to a person's eyes. For a direct-lit light panel having the diffuser layer disposed too near the LED light sources, the light output is non-uniform and hot spots (i.e. the strongest light output intensity area) will be observed.
The introduction of the edge-lit LED panel lights is based on balancing the relationships of the aforementioned factors to achieve a fixture that produces a light output that appears consistent to the human eye across the diffuser panel. Current LED flat panel lights are typically designed by using edge-lit backlight theorem, light is transmitted from an LED array to a central area of an edge-lit panel through light guides. Edge-lit LED panels are becoming an extremely popular technology used in indoor lighting fixtures. The availability of a substantially flat LED panel having edge lighting makes it possible for thin panels of flexible length and width delivering uniform light output. The lighting fixture and associated retrofit kit offers a device with great versatility and simplicity of installation. Edge-lit LED light panels can provide an ambient white that extends uniformly throughout the front face of the panel by integrating one or more diffuser elements. An LED panel generally speaking can be divided into a frame, and light emitting structures encompassed by the frame. The aluminum frame provides structural support, holds components of the LED panel such as LED strips and power circuitry, and also provides heat dissipation. A plurality of SMD LEDs are positioned adjoining to two or more of the edges of a light guide panel. The light sources for edge lighting include SMD2835, SMD5630, SMD3014, SMD4014, etc.
Edge-lit LED panel lights are known wherein light is coupled into the edges of a planar light guiding panel (waveguiding medium). The light is guided by total internal reflection through the entire volume of the medium and after that emitted from a light emitting face.  Light from the LEDs enters the edges of the LGP and is re-directed within the LGP to ensure that the light radiates from the front face of the LGP. A reflector may be installed on the back surface of the panel in order to reflect light toward front side surface of the panel that would normally exit from the back surface of the panel.  To minimize light emission from a rear face of the panel (i.e. the face opposite the light emitting face), the rear face will frequently add a light reflective layer. To facilitate a uniform emission of light, one or both faces of the light guiding panel may include a surface pattern made up of a surface roughening that creates a disruption to the light guiding properties of the LGP, at the site of the area producing a preferential emission of light at the area. As soon as the light enters the waveguide, it will travel within it. Reflectors and or diffusers attached to the edges aside from the one exposed to the light source module may be used to control the amount of light that will exit from the edges of the waveguide. Features on the waveguide can be employed to direct the light out of the waveguide in a diffuse manner or in an angle from the waveguide major planar surfaces.  Laser etching, chemical etching and shape painting are presently used as diffuse light extraction features. As an alternative, microlens light distribution features are useful to provide a more tailored and customized light output.

Typically, the diffusing panel is a translucent plastic material or a light transmissive plastic material possessing a regular surface patterning to facilitate a uniform light emission. The diffuser may be made of a mixture of a diffusing agent to have no unevenness. Which means, the light from the LED light source may be scattered by the diffusing agent compounded in the diffuser, as a way to remove hot spots. LED panels use materials including poly (methyl methacrylate) (PMMA or acrylic), polycarbonate (PC), and/or polystyrene (PS) as diffusers to scatter the light produced by the LEDs to ensure that the light distribution for the LED panel is Lambertian, or near Lambertian. once light is uniformly distributed across the panel, it will be diffused and directed through the panel into a locale to be illuminated by making use of a reflective material or reflector found on the backside of the light panel. Uniformity of the light produced by LED light panels can be an important consideration whereby a waveguide or light pipe function can be employed to deliver light from edge-lit LEDs toward the center of the respective panel.
LED light panels are dominantly employed in office lighting environment. Since office lighting must satisfy a range of human needs. Therefore, the lighting in an office may be deemed of high quality if it enables staff to see their visual tasks effortlessly and comfortably. The light quality is assessed by parameters such as lux for intensity, CRI for color rendering index and Visual Comfort Parameter (VCP) for glare. Lately, the Unified Glare Rating (UGR) as recommended by the International Commission on Illumination (CIE) has become widely recognized as a general formula for evaluating glare. Although there're many benefits of edge lighting panels which include thin profile, streamlined design, and uniform illumination. A downside, nevertheless, is that edge-lit LED panel lights cannot control UGR effectively. A consequence of ineffectively controlled UGR is the generation of glare, which can be extremely serious in large rooms. This is particularly the case for large rooms, or conference rooms, used in office settings. The amount of glare consistent with UGR values higher than 20 can be uncomfortable, particularly in the office in room settings noted above. Correspondingly, a UGR of 19 or less is preferred for edge-lit LED panels used in offices.
Improving luminous efficacy is yet another challenge for edge-lit LED panels. Luminous efficacy is the ratio of luminous flux (Lm) to applied power (Watts), the quotient of the total luminous flux produced by the LED panel light and the total power input it receives. It is expressed in lumens per watt (lm/W). A negative aspect of edge-lit lighting panels is the fact that they have a lower luminous efficacy in contrast to a direct-lit arrangement because of light losses within the light guiding medium, losses in coupling light into the medium and losses in extracting light from the medium. Since the light irradiated from edge-lit LED luminaires are reflective and the luminous efficacy is generally 80-100lm/W, as opposed to the direct-lit panels which produce directional lighting whose luminous efficacy can be as high as 160lm/W.
As pointed out above, a substantial advantage of an edge-lit LED panel lamp in comparison with a back-lit or direct-lit panel lamp is its compact nature, in particular overall thickness of the lamp which can be comparable with the thickness of the light guiding panel making it feasible to construct a panel of 8-12 mm in thickness. Furthermore, the LED panel can take on any size. For example, the LED panel can be square with a size of approximately 24×24 inches (600×600mm) , corresponding to an exemplary lower dimension of a typical fluorescent ceiling troffer. This versatility in sizing offers enhanced flexibility and use in connection with a wide range of applications. The aluminum frame can be processed with anti-static thermoplastic coating. The silver or white color of the frame blends easier with both commercial and residential ceilings and in the meantime the frame is scratch proof and corrosion resistant.
LED panel lights are typically powered by external constant current drivers with optional dimming capability. They're available in different color temperatures and also come in regular, DALI and analogue versions. They are designed to fit directly into existing standard suspended ceilings and recesses, or can be surface mounted to ceilings and walls or can be used as pendants. Its high performance is coupled with low energy consumption, extended lifespan, and streamlined look, making it the best solution for illuminating office spaces, major retail stores, education, government, healthcare, and hospitals - anywhere bright, beautiful, uniform light is desired for general purpose lighting.