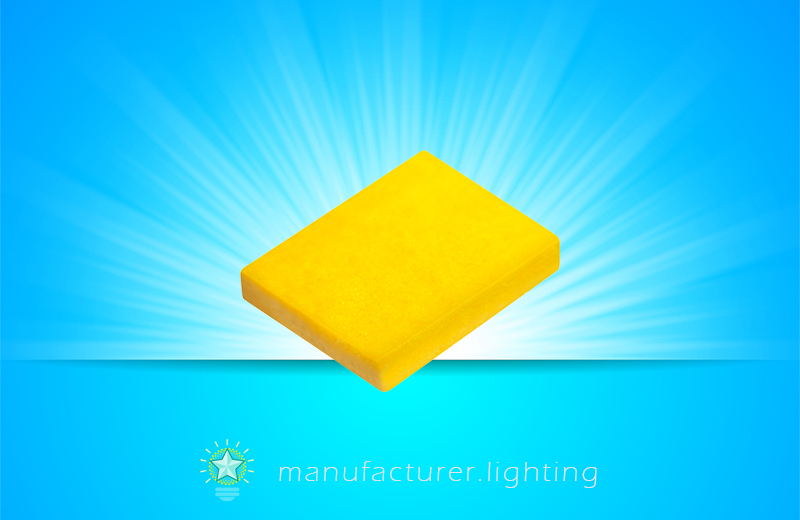 A chip scale package (CSP) LED refers to a package for the light emitting device which is coupled to the semiconductor light emitting device structure in a wafer-scale process, removing the separate step of having manufactured LEDs run through a packaging line (packaging can often be 60% of the total cost). A wafer-scale process at the same time encapsulates LED dies, forms lenses over LED dies, and forms a chip scale package for LED dies. A chip scale package is usually only slightly larger in area compared to the chip itself. CSP technology drastically scales down the size of a conventional LED package by integrating innovative flip chip technology with phosphor coating technology. This eliminates metal wires and plastic molds for the purpose of more flexible and small designs and lowers costs. Chip-on-board LED packages enable bright, uniform light output. These packages generally have a low thermal resistance which allows for low junction temperatures at the chip level, thereby contributing to higher efficiencies. CSP products enable flexibility in adapting the size of the light-emitting surface and luminance level to address a broader base of lighting application requirements. Chip scale packaging combines the best of flip chip assembly and surface mount technology. A typical flip-chip LED has reflective p and n contacts on a bottom surface of the LED, and the contacts are directly connected to bonding pads on a rigid submount which is much larger than the LED die. Light generated by the LED is mainly emitted through the top surface of the LED surface. CSP LED gives almost the size and performance benefits as bare die chip assembly, meanwhile as it provide the advantages of an encapsulated package. CSPs can be standardized, tested, surface mounted, and modified.