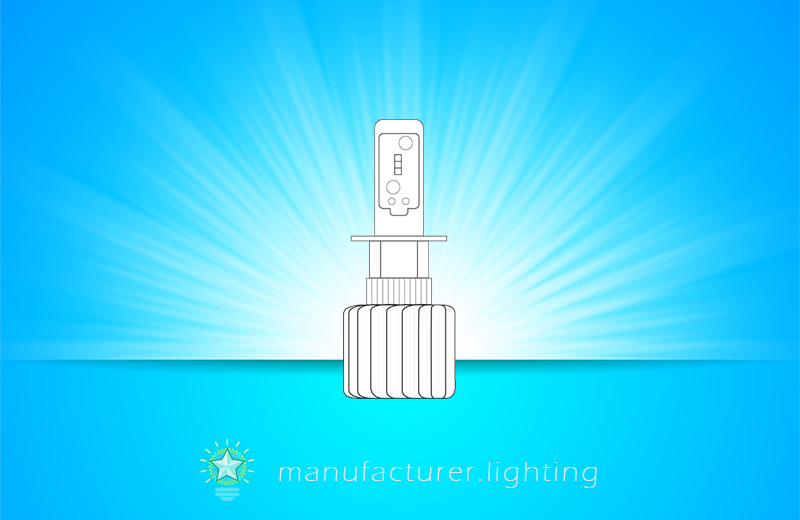 An automotive LED headlight bulb is a semiconductor-based solid state light source that offers considerable advantages over other lighting sources in automotive forward lighting. LED headlight bulbs are designed to generate, efficiently, accurately and reliably, a center-weighted distribution of light (high beam) and a light distribution to give adequate forward and lateral illumination that respects a cut-off line to avoid glazing the oncoming drivers (low beam). The majority of today's automotive headlights typically employ filament-based halogen bulbs, or high-intensity discharge (HID) lamps such as xenon lamps that produce electric arc illumination from a plasma arc discharge within an arc tube. These light sources have inherent disadvantages that drive the application of LED technology in automotive headlights. Both halogen and xenon headlamps have limited reliability and are prone to a catastrophic failure mode. They're fragile and require bulky optics to shape beams. With enhanced reliability and durability, improved contrast and color accuracy as well as incomparable energy efficiency, LED technology is rapidly gaining ground in the automotive lighting. LEDs consume only a fraction of the energy of a halogen or a xenon headlight. The instant-on and hot re-strike capabilities of LEDs bring safety illumination anytime when there's a need. An LED emits the light from a solid sate semiconductor chip, which provides greater resistance to shock and vibration, thereby increasing its lifespan significantly. The directionality of its light emission leads to superior optical control in creating uniform and accurate beam pattern.  One of the major challenges in mass application of LED technology for vehicle lighting is the management of heat that dissipates from the junction diode. Without proper thermal design, heat will accumulated in the constrained space and the raised ambient temperature of the surrounding environment may result in phosphor thermal degradation and eventually a reduced lifecycle. Maintaining performance of the opto-luminescent phosphors through effective thermal management is therefore critical for automotive lighting manufacturers to make their products stand out in the market.
Automotive & Marine Lighting