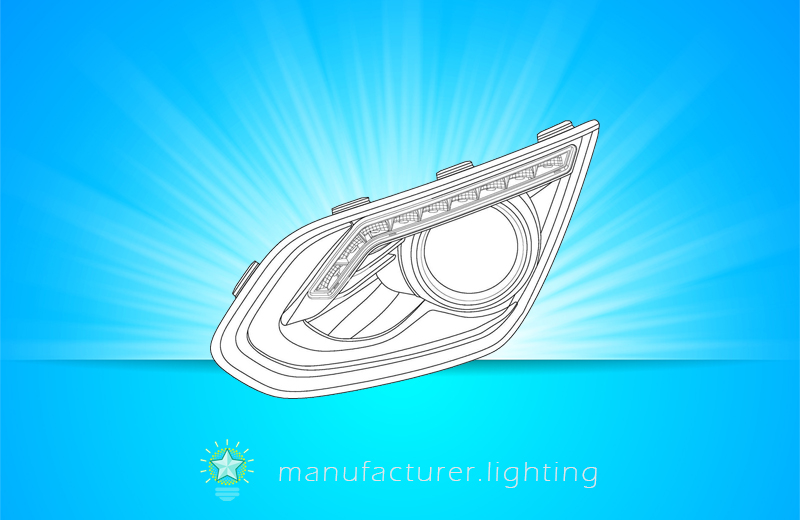 An automotive headlamp (also referred to as a headlight) is a luminaire mounted on a vehicle and employed to provide illumination ahead of it. Headlamps are designed to illuminate the road ahead and is required to be bright enough to allow the driver to perceive obstacles approximately 100 meters in front of the vehicle at night or in inadequate lighting conditions. Automotive headlamps are typically configured to switch a low beam and an upper beam (high beam). The high-beam mode lights up the front side in a wide range at a distance with a preferably high illuminance. The high-beam mode is generally used in the event the vehicle runs at high speed on a road where there are relatively few front running vehicles. The low beam illuminates a close distance with a pre-specified illuminance in order not to produce glare to forward vehicles which includes oncoming vehicles and leading vehicles, and is used primarily when driving in a downtown area. The headlamp can selectively irradiate forward a low beam as well as a high beam with differences in irradiation angles of light emitted from a light source and a light amount. The entire process of selectively irradiating the low beam and the high beam can be accomplished by the driver's operation of turning a switch on and off, or may be automatically switched based on a running state of the vehicle. Quite a number of headlamps comprise so-called projection optical systems which generally include an elliptical reflector that focuses the light emitted by the light source over to a masking means which generates the light/dark cut-off and a lens which results in the so-called light distribution in the road space. Many projector headlamp systems incorporate a halogen or High Intensity Discharge (HID) source with a reflector, a lens, and a clear cover which shields working parts and enhances appearance. Light emitting diodes (LEDs) are increasingly being introduced to minimize lamp configuration complications and decrease the number of manufacturing processes needed to produce a headlamp. The LED can ensure required brightness with long life and less power, and may emit light with stable brightness under a simple control that supplies a constant current thereto to be thus recommended as a light source for a vehicular lighting fixture.