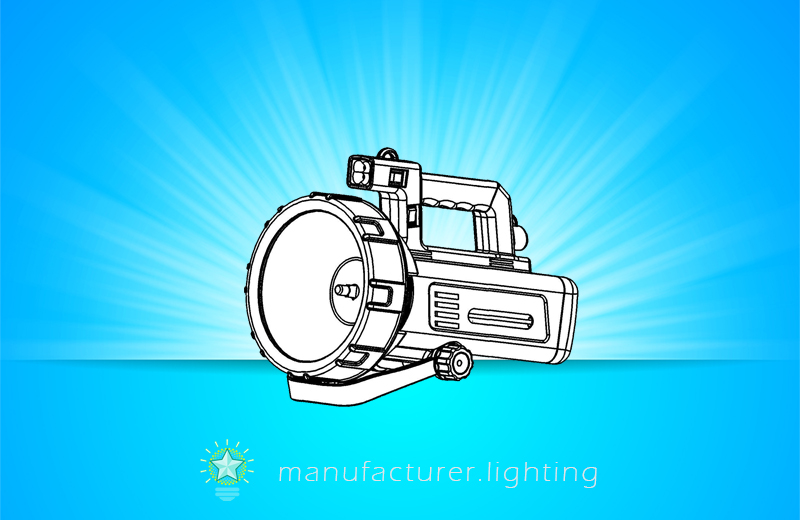 A searchlight is a projector which is designed to generate an approximately parallel beam of light. A narrow beam of light may be preferred to deliver more effective illumination at longer distances, greater intensity for a given light source at a given distance and also to minimize the intensity of stray light outside of the desired area of illumination that may, by way of example, annoy oncoming vehicle operators or result in a safety risk. Searchlights are widely used for local illumination which includes vehicle headlights, underwater lights, search lights for emergency vehicles such as police cars, helicopters, etc. Handheld searchlights with focused beams or spotlights or searchlights, whether battery-powered or line-powered, are frequently used by military, law enforcement, fire and rescue personnel, security personnel, hunters and recreational boaters to name a few for nighttime surveillance in any application where a high intensity spotlight is vital. Search lights typically comprise a light source, a reflector behind the light source and a lens in front of the light source. The reflector and lens are designed to act in concert to collect light from the source and collimate or focus the light into a targeted beam. A high degree of control is necessary to produce a collimated beam of the type required for searchlights used for live performances, special events, and illuminating tall structures. Searchlights are light sources which, unlike flashlights, are primarily adapted to search for distant items by lighting dark and/or unclear areas. LED searchlights have many advantages, such as high luminosity, low operational voltage, low power consumption, easy control, long operating life, and high impact resistance.
Outdoor Lighting