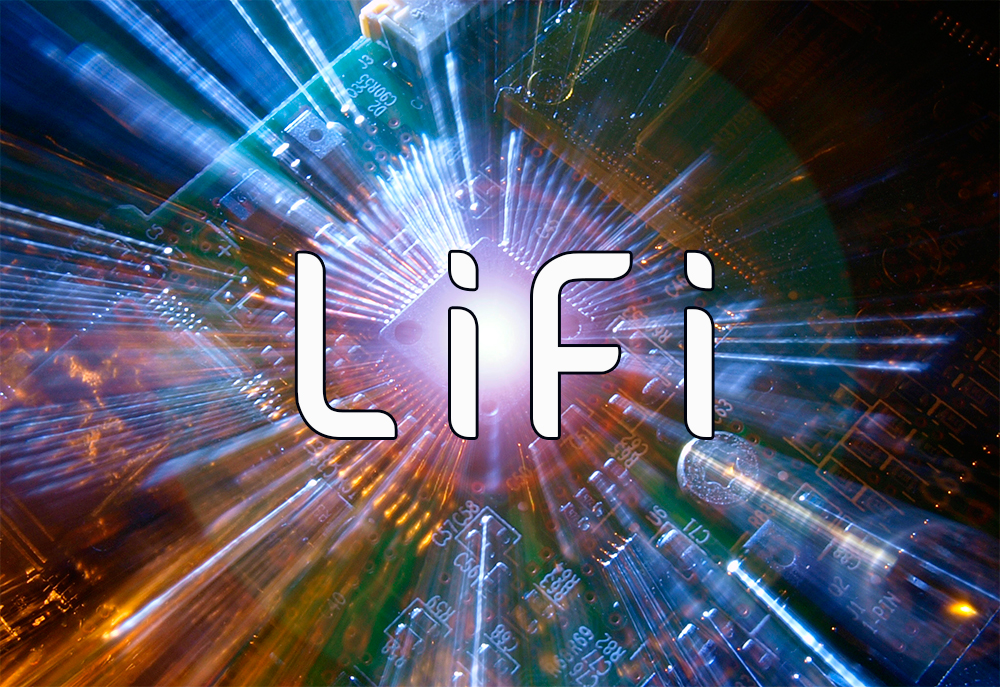 LiFi is a visible light communication (VLC) technology which makes use of light waves instead of radio waves for wireless data transfer. The term which is short for "Light Fidelity" was coined by Harald Haas who first developed the modern concept of LiFi with his research team at the University of Edinburgh. As a high speed, wireless broadband technology, LiFi was developed to address the challenges and overcome limitations faced by wireless communication technologies operating in the radio spectrum below 10 GHz. With more and more mobile devices being connected every day, radio frequencies are becoming congested. Overloaded network traffic lends existing RF infrastructures to spectrum crunches. With Internet of Things (IoT) opening up a whole new world of opportunities, LiFi is deemed to bring sense to the exciting digital revolution which demands immersive connectivity.

How Does LiFi Work
LiFi transmits data by modulating LED light to create binary code (on = 1, off = 0). A combination of 1s and 0s generates different data strings which are demodulated by a photodetector (photodiode receiver). The photodector produces an electrical current in proportion to the stream of light. The electrical current is then passed onto an analog-digital converter. Demodulated signals are decoded and forwarded to a connected device, such as a computer, tablet, smartphones, television or a smart appliance. To act as a network access point that provide bidirectional communication, the LiFi device must be designed to provide both uplink and downlink connection. Besides the downlink which uses visible light to transmit data from the light source to digital terminals, an uplink connection must be established to complete the full duplex communication. To avoid glare from the photodiode receiver, the uplink channel uses invisible parts of the light spectrum such as infra-red to upload data back to the source. Some LiFi solutions feature a hybrid network structure that combines Li-Fi with the conventional radio frequency (RF) communication.

LiFi and LED
Without the advent of solid state lighting (SSL) there would not have been revolutionary progress in optical wireless communication (OWC) technology. The heart of the LiFi is LED lighting which makes use of semiconductor diodes to produce light. When the diode is forward biased (switched on) across the p-n junction, electrons in the n-type semiconductor layers and holes in the p-type semiconductor layers flow toward each other and energy is released in the form of light when they combine. Rather than emitting light by exciting a gaseous medium in a glass envelop (i.e., bulb), as is the case with traditional light sources, the light discharge process of an LED happens in a solid state architecture and can be digitally controlled by regulating the electrical characteristics of the driving current. This means that only LEDs can operate with frequency of modulation in the range specific to visible light communication. Although LiFi transmits data by switching LEDs. The light pulses are imperceptible to the human eye because the frequency of these "on" and "off" sequences is so high that the eye cannot perceive the modulation or "flicker".

Implementation
The architecture of a LiFi system consists of two parts: an LED luminaire with a built-in modem that modulates the light and a LiFi USB key/dongle plugged into the socket of a laptop or tablet. The ability to perform signal modulation is key to any LiFi-enabled luminaire. The modem which is a digital signal processor integrated or attached to an LED driver transforms streaming content provided by a server over the Internet into digital signals. The DSP comes with a digital-to-analogue converter (DAC) which converts data into bytes. A transmitter module thereafter generates the corresponding on-off pattern and instructs the LED driver to provide high frequency switching operation. The LiFi dongle acts as a data receiver and data transmitter. It generally comprises a photodetector, a signal amplifier, a data processing circuitry, and an uplink module.

Modulation
It is essential to modulate data into a carrier signal which consists of light pulses sent out at short intervals. LiFi systems use different modulation schemes to encode information into light and they fall into two categories: single-carrier modulation (SCM) and multi-carrier modulation (MCM).

SCM is relatively straightforward to implement and is used for application where a limited amount of contextual information is to be pushed to a mobile device. Widely used SCM schemes for LiFi include on-off keying (OOK), pulse position modulation (PPM) and pulse amplitude modulation (PAM). OOK transmits data by sequentially turning on and off the LED and supports dimming by adding an OOK extension which adjusts the aggregate output to the correct level. PPM which is more power-efficient than OOK encodes the data into light using the position of the pulse within a set time period. Variable pulse position modulation (VPPM), a combination of PPM and pulse width modulation (PWM), allows the width of signal pulses to be controlled to support light dimming. Sub-carrier inverse PPM (SCIPPM) which has a sub-carrier part and a DC part allows for independent control of lighting for enhanced energy savings. PAM modulates light by varying the amplitudes of the individual pulses.

MCM is designed to address SCM's non-linear signal distortion, inter-symbol interference, and energy inefficiency problems in high-speed optical wireless communication. The most well-known MCM technique in LiFi networks is Orthogonal Frequency Division Multiplexing (OFDM) which enables parallel data streams to be transmitted simultaneously through a collection of orthogonal subcarriers. The adaptive bit and power loading of subcarriers allows for increased modulation bandwidth, simple equalization with single-tap equalizers in the frequency domain, and the immunity to low-frequency distortion. However, OFDM has a high peak-to-average power ratio. A high speed DSP is required to perform Fourier Transforms. And also OFDM places high demand on the accuracy of signal conversion.

Applications
Wide spread availability, high speed communication, and a host of benefits complementary to WiFi technology lend LiFi to an extensive array of applications within the realms of the Internet of Things (IoT), 5th generation of cellular systems (5G), and beyond.

LiFi and IoT
LiFi-enabled LED lighting is poised to play a major role in the Internet of Things which enables direct integration of the physical world into computer-based systems. IoT transforms the way people interact with their environment through the exploitation of data capture (sensing), communication and actuation capabilities. Forwarding data from the perception layer to the application layer of an IoT system requires a reliable, secure, efficient, and pervasive network layer. The network layer of IoT uses a combination of long distance and short-range network communication technologies such as Bluetooth, ZigBee, WiFi, 3G, 4G, 5G, and power line communication (PLC). WiFi is currently the most globally recognized wireless networking technology in IoT applications. However, as mentioned above, WiFi has its weak points. And LiFi is born to address the inefficiencies of WiFi.

With very low power consumption, convenience of setting up, wide availability and lower component costs, deploying IoT with LiFi across a facility will be a hassle-free exercise. LiFi's ability to transfer data through lighting easily expands a network of customizable IoT solutions that are previously not possible with RF communication technologies. LiFi not only provides a cost-effective, efficient and secure channel for more ubiquitous communication in IoT networks, it also contributes unprecedented robustness in the interaction between digital nodes and creates a multitude of mobile node-to-node IoT applications. LiFi and RF communication systems combine to address key IoT challenges such as interoperability, scalability and accessibility.

Human Centric Lighting (HCL): What Is It and How Does It WorkHuman centric lighting (HCL) synchronizes human biological clocks to the natural dynamics of a solar day. Circadian lighting uses tunable white technology to dynamical...

Best Smart Street Lights: Intelligent Street Lighting Systems and Smart C...A smart street light is an intelligent outdoor lighting system that is context aware to its environment and is wirelessly networked to support interoperability and sop...

How Does Smart Lighting WorkEverything you need to know about smart lighting. Experience intelligent, connected solutions that unlock the full energy efficiency potential of LED lighting. Open up...

Motion Sensors for Occupancy and Intrusion DetectionMotion sensors can be used to control lighting or automate the operation of other connected devices. The three most common types of motion sensors used for occupancy a...