Abstract: High power LED high bay lights deliver high levels of brightness without suffering from problems associated with heat dissipation in high ambient temperature applications.
A lighting fixture is an electrical assembly used to output light into an environment. In the lighting industry, you may often hear the terms "high bay" and "low bay" lighting, which generally describes the space and the height of the ceilings involved. A high bay luminaire is a lighting fixture that is designed for industrial locations high above the floor or work plane. High bay lighting applications may include lighting systems designed for use in structures with high ceilings, or "high bays" which include warehouses, manufacturing facilities, large retail stores, athletic facilities, or the like where the ceilings can be 30 or more feet high. 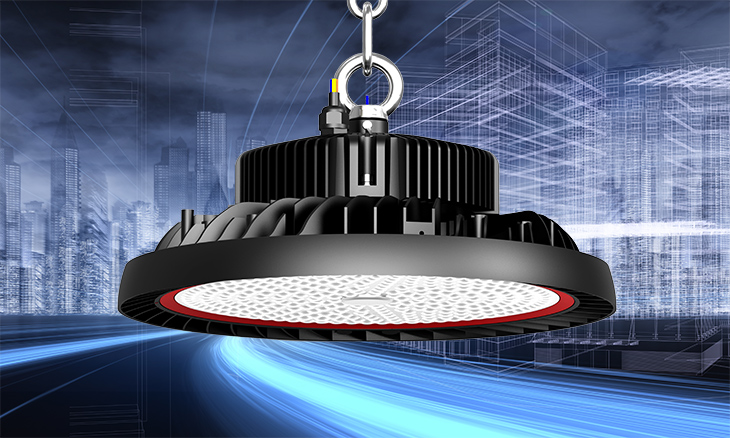 High Bay Lighting for High Ambient Temperature Areas
High bay facilities typically mount lighting fixtures at or near the ceiling. High power LEDs are frequently used in these lights in order to provide sufficient illumination. The level of light an LED outputs is dependent upon the amount of electrical current delivered to the LED and upon the operating temperature of the LED. LEDs producing a high luminous flux can be driven with an elevated electrical drive signal, which often causes the LEDs to operate at elevated temperatures. Furthermore, high bay applications generally have environments that are relatively more harsh and corrosive than low bay applications. In particular, high bay environments can have higher ambient temperatures, more airborne dust and oil particulates in manufacturing facilities such as steel mills, casting foundries, and glass manufacturing plants. When operating in a high ambient temperature environment and/or a space-limited enclosure, the heat generated by an LED and its attending circuitry can cause damage to the LED.

Accordingly, when it comes to high-power lighting applications in high ambient temperature environments, properly managing the heat generated within the LED fixture is important. Thermal management relates to a system's ability to draw the excess buildup of heat at the junction which often can degrade the phosphor and reduce lamp life away from the high fixture. LED manufacturers keep making improvements in designing for higher temperatures, e.g. using high-grade luminaire materials, optimized heat dissipation designs, and even temperature sensors that automatically dim lights as excessive heat accumulates.

Thermal Management: The Key to System Performance
For industrial lighting fixtures, in particular the UFO-style high bays in which circuitry and LEDs are housed in an enclosed housing, an efficient thermal design is critical to bring down the operating temperature of such optoelectronic device while improving performance and reliability. The thermal design is usually focused on the heat sink which is typically an integrated luminaire housing when it comes to high bay designs. A heat sink is designed to pull heat away from the junctions on each LED and from the driver housing. Heat sinks typically comprise a heat conducting material such as a metal, and include fins or channels to increase the heat sink's surface to provide for greater convection heat exchange with the ambient air. The housing may contain a built-in thermal venting chamber cast into the housing. Thermal conductivity of a high bay housing is determined by material composition and environmental conditions. The removal of waste heat by thermal conduction is also structured on the geometries of system elements. Heat sinks can be constructed from any high thermal conductivity material including but not limited to copper, aluminum, or metal alloys. Although copper can have a thermal conductivity as high as 400 W/m-K or more. Aluminum is the most preferred metal for heat sinks because of its relatively high thermal conductivity and ease of manufacturing. To improve heat dissipation and resistance corrosion, an acrylic powder coat finishes can be applied to both the inside and outside surfaces of the aluminum housing.

The aluminum heat sink can be manufactured in different processes with varied cost and performances. Stamped heat sinks are the lowest cost thermal solution but less efficient than extruded heat sinks and die cast heat sinks. The extrusion process is advantageous at manufacturing complex fin profiles which allow greater heat dissipation through increased surface area. Forged heat sinks have a very high aluminum purity and accordingly have an excellent thermal conductivity - usually 20% higher than the extruded and die cast heat sinks. High purity aluminum can have a thermal conductivity at room temperature of approximately 210 W/m-K. Extruded and die cast manufacturing often involves alloying elements for easier processing, but these impurities are negative to the thermal properties. An extruded or die cast aluminum heat sink has a thermal conductivity of approximately 160-200 W/m-K. As the cost/performance ratio is often the key consideration in system design, forged heat sinks are used less frequently than other types of heat sinks. Furthermore, die cast high bay light housings offer one-piece construction and eliminate secondary operations such as machining and assembly and can be molded with many features such as fins, chambers, dedicated vents or openings, or specific shapes for maximum heat dissipation. Modern UFO high bay fixtures are increasingly designed with streamlined form factors for aesthetic considerations as well as better thermal management. Properly designed luminaire housings, by way of example, can avoid dust accumulation in the long run and the system thermal conductivity will not deteriorate.

Better thermal management allows the high power LEDs of a high bay luminaire to be driven at higher current levels while mitigating the negative effects on life and light output typically connected with high ambient temperatures. Designers have a couple of ways to keep the high power LEDs cool through the use of other passive thermal management technologies, such as heat pipe-based assemblies. A heat pipe system utilizes two-phase heat transfer through the evaporation and condensation of a working fluid. Other thermal management strategies have been developed that make use of active cooling devices, such as fans, to radiate heat from the LEDs. Forced air convection generated by a fan can increase heat transfer to the ambient.

Board-level Thermomechanical Reliability
A good thermal design for LED high bay lights in high ambient temperature applications also involves board-level optimization. The high bay LEDs or LED arrays are typically attached to LED MCPCBs (metal core printed circuit boards) which act as heat spreaders thereby transferring the heat flux into the heat sinks. Adequate contact between the PCB and heat sink is critical in order to ensure maximum thermal transfer. An MCPCB for UFO high bay light includes a round PCB where the base material for the PCB includes a high thermal conductivity metal, such as aluminum, copper, or copper alloy. An improvement to passive heat radiation is the use of a thermal grease or similar dielectric layer, also known as thermal interface material (TIM) to enhance the thermal connection between the PCB and heat sink. The circuitry and its related traces can be disposed upon the electrically insulating TIM which may be phase change material (PCM), thermal greases, conductive adhesive tapes, gap filling pads, and epoxies. The thermal conductivity of TIM is critical to minimize the air gaps between the heat sink and the PCB by providing a thermal interface. Phase change thermal interface materials, because of their unique polymer structure and phase change capability, feature low thermal impedance, excellent wetting, low contact resistance, low bond line thickness (BLT) and high thermal stability. TIMs transform themselves from a solid state to a liquid or gel state as the temperature reaches its phase change or melt temperature and can withstand high temperature up to 150°C and last for as long as 7 years at ambient temperature 80 °C, which outperforms even the best silicon grease in both thermal performance and lifespan.

LED Driver: The Short Plate in the Bucket Principle
A significant problem associated with the use of high bay fixtures in high ambient temperature environment, however, relates to complications that arise in connection with the driver that is utilized to properly manage the load and effectively supply the needed low voltage power to the LED. The driver circuitry is particularly susceptible to overheating and it can end up in failures in one or more components of the driver, and therefore a malfunction or shut down of the entire fixture. The temperature-sensitive components include electrolytic capacitors used as the main energy-storage storage element in a power factor corrector (PFC) which is often found in high power LED luminaires. The wet electrolyte in capacitors tends to slowly evaporate or diffuse at increased temperature levels. The lifetime is halved if the operating temperature is increased by every 10 degree Celsius. At relatively high temperatures, the high frequency coils or transformers (flyback) isolation and magnetic core characteristics could change dramatically with the ambient temperature. Therefore, the thermal management for the power supply unit is a major criteria factor in identifying a good candidate for lighting in high ambient temperature.

Fortunately one of the top LED driver brands, Mean Well, developed the HBG power supplies for high bay lighting fixtures. This family of LED drivers can operate from -40°C to +70°C (60000 hrs, @ 60°C, 75% load) ambient temperature and is backed by a five-year warranty. Their DMTF accelerated life test reports that HBG drivers have a lifetime of 40000 hrs @ Tc 70°C (Tc = package case temperature). By incorporating a highly reliable driver into a luminaire housing with optimized thermal management design, the most concerned issue won't be a bottleneck in reaping the benefits of solid state lighting technology for high ambient temperature applications.
Some more info that might interest you